Are upside inflation risks rising in developed economies? That’s one question we look at in this week’s edition. First up is a synopsis of the UK GDP figures, then a look at rising British inflation, the Bank of Canada decision and inflation rate, the surge in US producer prices, and a look at New Zealand inflation. Overall the theme is that there are indeed signs of increasing inflation risks for these developed economies, and even though some of the short term drivers may be temporary there is the risk that they have a lasting impact.

1. UK economy muddles along…
The first G7 economy to report growth, the UK saw its economy growing at 0.2% q/q in Q1 2010, against expectations for a repeat of Q4 2009 of 0.4%. On a year over year basis it is still just in negative territory. The recent two quarters provide tentative evidence that the deepest recession on record for the UK could be coming to an end. But the usual line for economic commentary these days is that significant risks remain. The UK is currently faced with an official unemployment rate of 8%, and its once burgeoning financial sector will take some time to recover from the GFC, and significant risks remain around government finances and inflation.

2. While UK inflation picks up
The UK saw its inflation rate pick up again to 3.4% on an annual basis from 3% in February, and is currently sitting well above the official 2% target. Granted, much of the increase is related to the reversal of the drop in the value added (sales) tax which was dropped as the financial crisis set in to help stimulate the economy. The commodity price rebound has also assisted the resurgence of inflation. But even though these are temporary or artificial drivers of inflation, there is the risk that inflation expectations could be impacted and that wage and price negotiations factor in a higher rate, which will require the Bank of England to move on its record monetary policy stimulus measures. 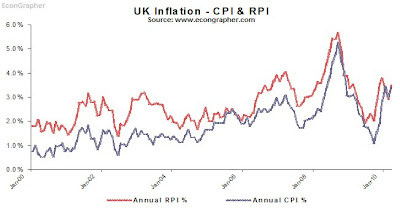 3. Canada holds rates again, inflation remains stable
The bank of Canada held off again on increasing interest rates from the record low 0.25%. Meanwhile inflation came in at 1.4% year on year for March, down on Feb; core inflation grew 1.7% in March, against expectations for a 1.9% rise. The Bank of Canada also noted its conditional commitment to hold rate low at least until Q2 2010 had expired, and that “the need for such extraordinary policy is now passing”, and thus will likely start paring back its policy stimulus as conditions dictate in keeping with the 2% inflation target. The Bank of Canada also lifted its growth projections for the Canadian economy to 3.7% in 2010 slowing to 3.1% in 2011 and 1.9% in 2012. 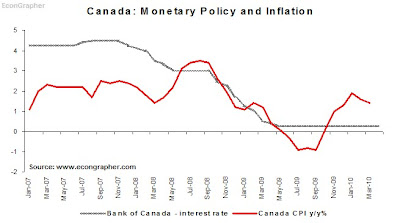 4. US producer prices continue to increase
US PPI jumped unexpectedly in March, rising 0.7% against forecast 0.4% and February’s -0.6%. On an annual basis it rose 6% in March. Meanwhile core PPI rose 0.1% month on month and 0.8% year on year. Thus much of the increase in prices is related to food prices and energy prices i.e. the great commodity price rebound. But as noted in the UK situation, there is a real risk that this temporary inflationary surge translates into a more generalized pick up in inflation and inflation expectations. This could have the impact of rising wage and salary costs even as unemployment remains extremely high (and as noted by the IMF, could be higher than indicated). Thus the risks for US inflation remain to the upside.

5. New Zealand inflation moves sideways for now
New Zealand inflation moved sideways in the March quarter (as noted in my previous article), but looming factors will make this a temporary situation. The headline inflation figure was 2% y/y, on a quarterly basis it was up 0.4% since December 2009, below consensus estimates for a 0.6% increase. As noted factors like the emissions trading scheme, and increases in ACC insurance premiums, and possibly an increase in the GST (sales tax) rate, will have an artificial but significant impact on price levels in New Zealand. While the RBNZ wont be panicing about this, it may start to raise rates back to neutral as the risk of more generalized inflation picks up as the New Zealand economy continues to recover. 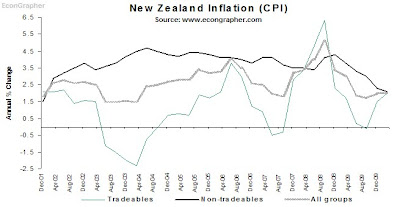 So we looked the UK economy, and saw significant risks to the recovery as the UK emerges from one of its deepest ever recessions. At the same time we saw inflation picking up in the UK, even though the short term drivers may be temporary. Looking at Canada, we saw the Bank of Canada moving ever closer to an increase in interest rates as inflation moved sideways, but the Bank of Canada lifted its outlook for the Canadian economy, and noted the cessation of its low interest rate commitment.

On to the US, we saw producer prices showing a marked rise, and even though much of the drivers were temporary e.g. commodity price rebound, price normalisation etc. There remains the risk that it gets passed through and factored into inflation expectations. Likewise in New Zealand the outlook for inflation is definitely upwards based on artificial and temporary factors, but the risk is there that these factors pass through into higher real inflation.

Thus the evidence is broadly showing that inflation is currently trending either sideways or upwards in these developed economies, certainly the short term risks remain to the upside as temporary and artificial factors play through. But there is a real risk that these short term factors have a lasting impact. So, of these countries, who will be first to raise interest rates?