This week we examine the GDP results from last “BRIC” economy to report, Brazil, then we look at another one; China and see how international trade and retail sales are tracking. Then we analyze the recent US consumer credit data, and finish up with a review of four of the monetary policy decisions this week.

The themes are big ones this week; there’s emerging markets leading the recovery, there’s global imbalances and potential changes in the make up of the Chinese economy, and finally, monetary policy continues on a de-synchronized path in response to a de-synchronized global economic recovery.

1. Brazil GDP
Brazil reported year on year GDP growth of 9%, smashing the consensus forecasts for 7.6%, and accelerating from the 4.29% in the previous quarter, and -2.14% same time last year. Some of the large number is related to a lower base comparator, but much of it is related to an accelerating recovery in Brazil; highlighting risks of overheating. Indeed the Brazilian central bank ended up raising the Selic rate another 75bps a day or two after the GDP results were announced (see the piece on monetary policy below). So it is good news for the Brazilian economy, it’s interesting to see it growing at China levels, but the question of sustainability remains. 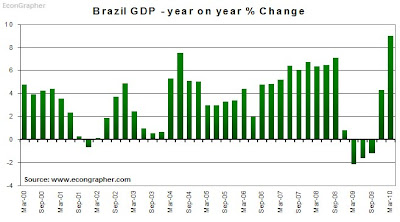 2. China International Trade
The Chinese international trade figures for May produced additional ammunition for the yuan bashers, with the surplus growing from about $1 billion in April, to $20 billion in May, and pretty much proving that the March deficit was a one-off cyclical quirk. So exports rose 48.5% year on year, and imports rose 48.3% year on year (mind you, this time last year they were still reporting sub-100 billion dollar figures), month on month imports fell and exports rose. I’m going to repeat that this is going to be an interesting chart to watch in the coming years as the rebalancing of the Chinese economy commences. As I’ll note below, the yuan part of it (while still relevant, and unhelpful to be fixed), may start to lose relevance in the case for Chinese economic restructuring driving sustainable growth…

3. China Retail Sales
China reported retail sales of 1.25 trillion yuan in May, up 18.7% year on year (compares to 1.15 trillion in April, with a y/y rise of 18.5%). As with the chart above this is going to be an interesting chart to watch as the Chinese economy begins to draw more and more growth from domestic consumption, and less from an export led strategy. Already there are some high profile wage rise increase stories in the media, with Foxconn being very notable, and the Honda case also being notable (especially given that it is a foreign company, thus there is a bit of a signaling effect that the authorities are allowing it to happen). The point I alluded to above is that as wages rise in China (and they will eventually, driven in part by inflation, driven in part by the new generation and cultural trends). This is probably even a preferable solution to yuan floating, but will eventually have the same effect as wage costs push up export prices and lower competitiveness on a price basis. Watch this space…

4. US Consumer Credit
US consumer credit rose by $1billion in April, matching consensus and beating the previous (downwardly revised) -$5.4 billion. The gain was driven by a $9.4 billion increase in non-revolving credit (reflecting strong car sales), off set by an -$8.5 billion decrease in revolving credit. The chart below shows what looks like a turning of the corner for consumer credit, and this lines up with the trend in the labour market. However arguably this number should still be contracting due to the need for consumer deleveraging to continue, the US personal savings rate was reported as 3.6% in April, which is towards the higher end compared to recent times for the US, but work still needs to be done in deleveraging, and increasing the savings rate (similar but in different direction to the China rebalancing above), for a more structural and sustainable recovery in the US.

5. Monetary Policy Review
In the past week the Reserve Bank of New Zealand increased the official cash rate 25bps to 2.75%, the Banco do Brasil increased the Selic rate 75bps to 10.25%, the Bank of England held at 0.50%, and the European Central Bank held at 1.00%. In a more detailed analysis, I identified that the key trend going on here is that monetary policy stimulus withdrawal continues to be uneven, with different paces matching different prospects, and rightfully so as the global economic recovery looks more and more uneven. So it’s synchronised on the way down, just like the stock markets – highly correlated on the way down, but correlations will decrease as the recovery unfolds. 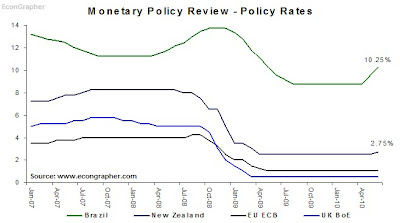 Similarly in China, the new data out this week seems to point in positive directions, but there’s more to the surface numbers (if you believe them that is). There are forces in motion in the Chinese economy that will result in an eventual rebalancing of export lead growth to domestic consumption lead growth, and this could happen with or without the yuan if wage increases continue.

Meanwhile in the US, there are weak signs of potential continuation of consumer deleveraging and wealth rebuilding in the consumer credit and savings rate numbers. However it probably wont last, and as with the risk to China’s rebalancing; old habits die hard.

Finally, monetary policy stimulus exit is commencing in more places and picking up, but is distinctly de-synchronised, but then so is the economic recovery. Already we’ve seen it confirmed, emerging markets are growing strong, developed economies are scarcely growing at all. But through all the recovery and stimulus exits, and so-on, it shouldn’t be forgotten that with such a disruptive turn of events, there is the opportunity for structural change for a more balanced and sustainably growing global economy.