Skip to content
Loading...
Latest posts
The Investors Podcast – Contrarian Investing Ideas
Let’s Talk About the Utility of Balance Sheet Consolidation
Stop Saying MMT Describes Reality – It Doesn’t
Does War Matter for Your Portfolio?
What Should You do When the Stock Market Goes Bonkers?
Chart Of The Day

This week we review the Q3 GDP results from the UK and US, then look at the recent data on the US housing market and consumer confidence. Then we examine some of the monetary policy decisions announced over the week, before wrapping up with a look at the inflation and employment situation in Japan.

1. US GDP
First up is US GDP which grew 0.4% q/q (or 2.0% “annualised” vs consensus 2.0%). On a year on year basis the US economy grew 3.1% vs 3.0% in Q2. Much of the gains were in inventory investment, consumer spending, equipment investment and government spending. So overall, the result was much as expected – relatively ho-hum, showing the US economy recovering – but at a subdued and muddled pace. So of course it’s not plain sailing yet, a lot of the damage done during the financial crisis needs to be repaired, and a lot of the excesses need to be unwound before a true sustainable economic recovery can take place in the US.

2. UK GDP
over in the UK the growth rate was relatively strong at 0.8% q/q, which is a little lower than the 1.2% in Q2, but still respectable and enough to disappoint those that were hoping for another round of quantitative easing from the Bank of England. On an annual basis the British economy grew 2.8%, up from 1.7% in Q2. But as with the US, the all clear can’t be signaled yet, and it is too soon to rule out further monetary policy stimulus – especially as the UK government seeks to reign in its budget deficit (maybe a bit of contracting on the fiscal and expanding on the monetary). So all the more reason to watch what happens next week!

3. US Consumer Confidence and Housing
Also out in the past week was the much watched Case Shiller House price report for August, which came in weaker on a monthly basis and slowed its increase on a yearly basis. So a disappointing result, but not a surprising result – there’s no fundamental basis to expect a strong upsurge in the US housing market (and relatively small basis for sideways movement in prices). So of course it’s also unsurprising to see still subdued results in the consumer confidence numbers, albeit with a small increase to 50.2 from 48.5 in September. At the margin the result was positive in that much of the increase was driven by an increase in the future expectations index, which is sensible. 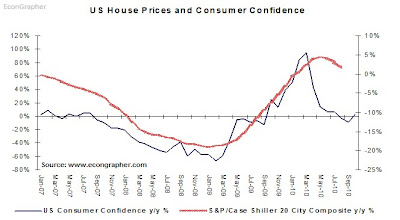 4. Monetary Policy
In monetary policy there were no major events this week, the main items of interest were Denmark, and Sweden both increasing interest rates slightly – but signaling a slow move. The other interesting part was Japan, which expanded the scope of its asset purchase program and brought forward the next meeting date (to just after the Fed’s meeting next week). On that note, the next week will be a very interesting week monetary policy-wise as the US FOMC, Bank of Japan, Bank of England, RBA, and ECB are all set to announce policy decisions. The main point of attention will be what the US Fed does in terms of QEII – will it go for a shock and awe campaign, or will it go for an incrementalist approach? Either way it almost seems a certainty now that the second quantitative easing campaign is about to commence. 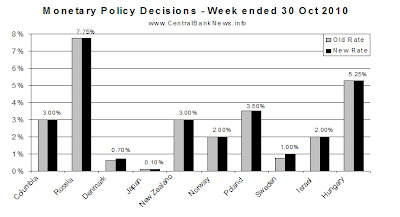 5. Japan Inflation and Unemployment
In Japan, deflation remained persistent with the CPI falling -1.1% vs -1.0% in August, but the jobless rate slipped slightly to 5.0% vs 5.1% in August on the back of increasing payrolls. As pointed out, the Bank of Japan expanded the scope of its asset purchase program to include lower graded corporate bonds in effort to try and stimulate the economy and try and inject a semblance of inflation. Most remarkably though was the move to hold another meeting next week just after the Fed, which signals that the BOJ is ready to act if the US makes moves to devalue the US dollar. This would not be surprising as the Japanese economy is traditionally an export led economy, and with recent trade results faltering somewhat it may make for an interesting week indeed.

So we saw the US with relatively subdued growth in Q3, but growth nonetheless. But without showing major signs of strength has all but pave the way for a second campaign of quantitative easing by the US. Meanwhile the UK grew a little faster, and perhaps even blew the case for an extension of the asset purchase program by the Bank of England. We also saw a weakening US housing market and a US consumer stuck in limbo. On the monetary policy front most held, a couple increased, but the real monetary policy action will come next week. In Japan deflation remained, jobless declined slightly, and the BoJ lined itself up to counter any possible dollar devaluing determinations from the Fed next week.