It seems challenging to interpret the continued discrepancy between the current level of US interest rates along with the current levels of risky assets.   The VIX has dropped, realized volatility is low, credit spreads have tightened in and the equity market is close to its 3+ year highs…yet the 30 year treasury yield seems anchored to about 3%: 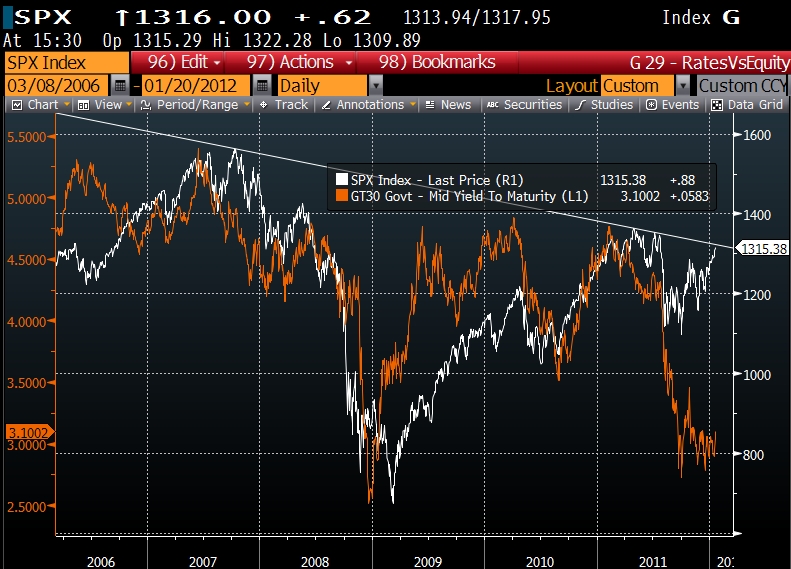 There is some validity in stating that the Federal Reserve is keeping interest rates low, but I do not believe that the continued low yields in the 10 year treasury and beyond can merely be attributed to the Fed’s purchasing of treasuries or verbal commitment to low interest rates.  The current inflation rate, as measured by CPI, is running at 3% which implies that the yield you earn over a year’s time by owning a 30 year treasury bond is entirely eaten away by inflation.

Now comes the investment aspect of it – why would you be willing to invest at a zero rate of return AND expose yourself to the risk that interest rates increase or inflation is greater than current levels or future expectations?  Bonds, even those issued by the treasury, are not riskless.  If 30 year interest rates increase by 1%, you can expect to lose 15%+ of your investment on a market value basis.

The bottom line is that the buyers of bonds are making a very different call than the buyers of equities.  I have a difficult time believing that it is truly an artifact of Fed intervention or even a flow of investment from non-US institutions and governments into the dollar.  I maintain that one of the markets is wrong.

As you can see from chart above, the S&P 500 is testing a downward trendline that started in 2007.  It will be truly interesting to see if it bounces off of these levels as the euphoria fades.  Peak profit margins have probably been reached and it is doubtful that strong growth will be driven by increased top line revenues.