Skip to content
Loading...
Latest posts
Three Things I Think I Think – Bubbles, Bernie & the Recliners
American Living Standards Have Never Been Better
Why is Shorting Stocks so Difficult?
Sorry, but Your ESG Funds Probably Suck
Do Recessions Need to Happen?
Most Recent Stories

The European countries have pointed at austerity as the path to enlightenment.  Fiscal discipline and cost cutting will make the markets happy…or will it?  If you have looked at the credit default swap level of Ireland lately, you would think that they were just as irresponsible as Greece and currently just as risky as Portugal.  In just a month’s time, Ireland’s CDS has been able to match Portgual’s at over 340 bps, which implies about a 25% default probability in the next 5 years. 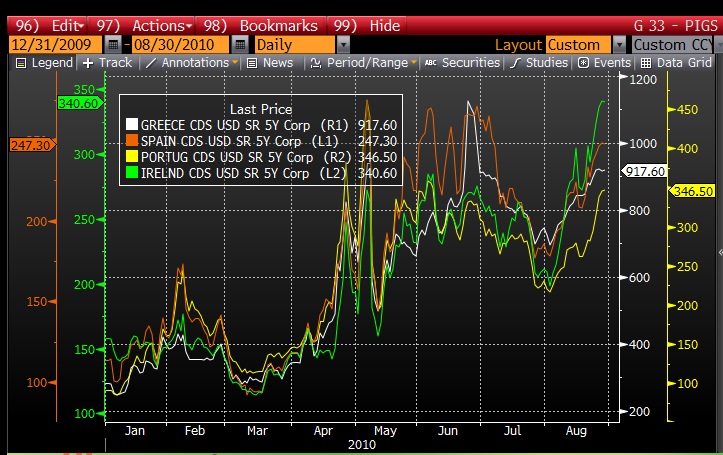 The reason for Ireland’s gap out in spreads has much to do with credit downgrades.  The credit downgrades had much to do with a banking collapse which has an estimated recapitalization cost for the country of $50 billion euros, or 1/3 of the economy.   In addition, Ireland ran a deficit of 14.3% of GDP last year which was the largest of the euro-area.  On the bright side, Ireland has embraced austerity measures.  They have raised taxes where able and have reduced public sector salaries by 13%, yet its cost to borrow continues to climb.

If Ireland is unable to make the Euro experiment work, then I have no clue how Italy, Portugal, Spain, and Greece are supposed to pull their countries together.  Ireland was a thriving nation which collapsed under the weight of a financial bubble.  Now, they must borrow at costs which rival Portugal’s even though they practice fiscal discipline.  It makes you wonder if a credit induced recession can be fought legitimately with fiscal responsibility while others are able to fill the holes with piles of fresh fiat currency.