The September GDP release from the Bureau of Economic Analysis (“BEA”) contains only minor revisions to previously published data. The headline “third” estimate of the annualized rate of GDP growth was revised up to 1.7% from the August “second” estimate of 1.6%. To keep these numbers in perspective we need to look a little more closely at what the GDP tries to measure. The classic definition of the GDP can be summarized with the following equation:

or, as it is commonly expressed in algebraic shorthand:

If we build a table around that equation — showing each term’s total dollars (rounded to the nearest $.1 trillion), each term’s percentage of the total GDP, and each term’s contribution to the final percentage growth number — it might look something like this:

Several of the numbers in the above table merit comment:

► Deteriorating (X-M) nearly offset the total positive growth contributions from the industrial and governmental sectors. This is a substantial change from the 4th quarter of 2009, when improvements in (X-M) added 1.9% to the final GDP growth number.

► “I” (Gross Private Investment) pulled the final GDP growth rate up by 2.9%. This is also a highly volatile component of the GDP growth rate, having recently swung as negative as -6.8% during the 1st quarter of 2009.

► At the Consumer Metrics Institute we measure only a portion of the “C” in the above equation. In fact, we intentionally capture only the discretionary durable goods transactions of internet shopping consumers, a particularly volatile subset of “C.” We don’t track the core non-discretionary items that represent perhaps 90% of take-home pay: groceries, gasoline, utilities, non-discretionary medical expenses and current housing (and in a deleveraging world, you can add personal savings and/or debt retirement to that list). 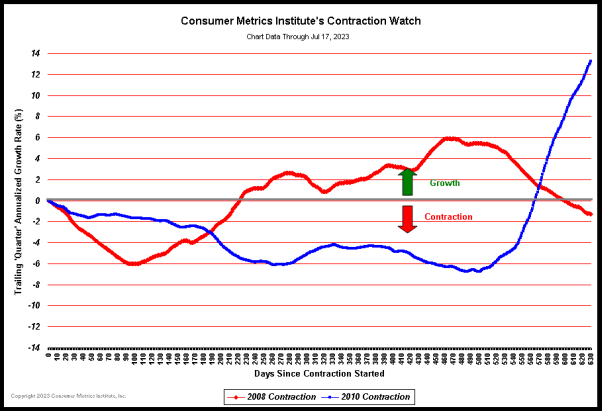 In the above chart, the day-by-day course of the 2008 and 2010 contractions are plotted in a superimposed manner, with the plots aligned on the left margin at the first day during each event that our Daily Growth Index went negative. The plots then progress day-by-day to the right, tracing out the changes in the daily rate of contraction in consumer demand for two events.

Our concern with the above argument is the implicit projection of the blue line “recovering” in a manner similar to the upswing seen in the 2008 contraction. The 2008 “recovery” was aided by stimuli unlike anything currently pending. And the 2008 “recovery” started with a background level of 6% unemployment. Furthermore, we don’t expect any consumer driven U.S. economic miracles at least for the next 30 days — until the results of the 2010 U.S. midterm elections are known. That should add nearly 150 percentage-days of contraction to the above totals before any “recovery” upswing could plausibly start, placing the economic consequences of the 2010 contraction at least 1.67 times the pain suffered in 2008.

Looking at the chart above, the striking difference between 2008 and 2010 is the implied longevity of the current event. Projecting forward, we will probably see another 30 days of political “Fear, Uncertainty and Doubt” (“FUD”) pushing the blue line laterally to the right. And when the blue line eventually starts back up, we face the real possibility that the plateau visible in the left half of the chart’s blue line is the new consumer “norm,” reflecting the realities of a deleveraging U.S. consumer. If that is true, the economy’s “800 pound gorilla” will have gone on a serious diet.